If you are planning a trip to Taiwan for the first time, there are several areas worth visiting to make the most of your trip. While there are multiple beautiful, historic areas, the following are my personal favorites for Taipei travel. Please feel free to use this as a sort of personal Taipei travel guide when planning your Taipei vacation.

We start our Taipei tour at Taipei 101. This is a skyscraper located in the Xinyi District. In 2004, it was listed as the world’s tallest building at 1,671 feet. It held that title for 6 years until the Burj Khalifa in Dubai eclipsed Taipei 101 in 2010. The tower boasts 101 stories and features an outdoor observation deck on the 91st floor like the Empire State Building in New York City where you can see beautiful views of the surrounding areas. 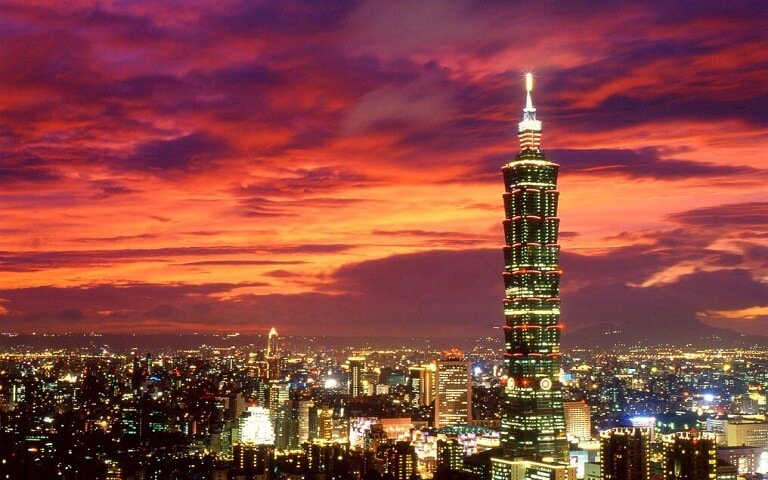 The bottom five floors of Taipei 101 feature a luxury shopping mall with upscale shops such as Burberry and Louis Vuitton. On the 88th floor indoor observatory, you can see the 730-ton mass damper, basically a giant ball that acts like a pendulum to counteract the buildings sway during high winds. Without this damper, people on high floors can actually suffer from motion sickness from the constant swaying of the building! Taipei 101 is a city icon that is visible for miles across the city. Every New Year’s, Taipei 101 attracts tens of thousands of visitors to see its spectacular fireworks display.

If you are into shopping, you can’t go wrong with Ximending. This is the shopping area in the Wanhua district of Taipei and is considered to be the fashion capital of Taiwan. On weekends, Ximending streets are closed to traffic and becomes a pedestrian shopping mall. The area is popular with street performers of all types and, because it is a hotspot, you can catch celebrities hosting small outdoor concerts, album launches, and other events.

Ximending is also famous for its “Theater Street” where there is a concentration of several movie along Wuchang Street. For history buffs, though, the most famous theater in the district is the Red House Theater which was built in 1908 during Japanese occupation and is still an operational theater with regular performances.

If beautiful sights are what you look forward to when travelling, then I can’t recommend Yangmingshan enough. It is the largest natural park in Taipei. Yangmingshan is great for hiking and has numerous trails that can last an entire day or just a couple of hours. Popular trails include Seven Stars Peak which will take you to the highest peak in Taipei at 1120 meters (3600 feet) or see the stunning waterfall of the Juansi Waterfall Trail.

Each February through March, Yangmingshan is the site of the Yangmingshan Flower Festival when several varieties of flowers such as azaleas, camellias, and especially cherry blossoms reach their peak bloom. Every evening of the festival, cherry blossom trees are illuminated for a particularly romantic sight. Visitors can also have lunch and dinner at one of many restaurants such as The Top or Grass Mountain Chateau for spectacular vistas of Taipei below.

Between the beauty of the cherry blossoms and the views of the city, Yangmingshan is a well-known romantic spot for lovers all over Taipei. From April to May, when calla lilies reach full bloom, you can pick your own lily flowers for only a few dollars at one of several flower farms.

Lastly, don’t miss out on Yangming Shuwu, also known as Yangming Villa, the beautiful summer retreat of the late president Chiang Kai-shek. Yangming Villa house and gardens are maintained as they were when occupied by Mr. and Mrs. Chiang. The house is a two-story traditional Chinese home, with reception rooms and offices on the first floor and the Chiang’s personal residence on the second floor where their paintings and personal photographs are still displayed.

The gardens are especially beautiful in the Spring when the flowers are in bloom. As a bit of trivia, it’s been noted that several bushes are planted in bunches of five – to symbolize the “5-star” rank of General Chiang.

Next, we find ourselves at the National Palace Museum which opened in 1965. If you love history, this is the place to be! National Palace Museum has a humongous collection of 700,000 permanent exhibits of Chinese Imperial history and artwork that spans over 2000 years plus prehistoric Chinese artifacts and artwork that dates to the Neolithic era, or better known as the “Stone Age”.

The most popular item in its collection is the Jadeite Cabbage. Carved during the 19th century, it is a piece of jadeite that has been shaped to resemble a head of Chinese cabbage and has a locust and a grasshopper camouflaged in its leaves. Legend says the sculpture is a metaphor for female fertility, with the white cabbage stalk representing purity, the green leaves of the cabbage representing fertility, and the insects representing children.

HIGHLY RECOMMENDED  These are the most powerful passports in Africa

Another historically significant landmark on our trek to learn about the history of Taiwan is the Chiang Kia-shek Memorial Hall. This is a national monument that was built in honor of former Republic of China President Chiang Kia-shek. The memorial marks the geographic and cultural center of Taipei. It is the most visited attraction by foreign tourists. The pagoda style memorial hall has a presidential library and museum on the ground level.

The main hall features a large, seated statue of Chiang Kai-shek, much like the Lincoln Memorial in Washington, D.C. The memorial hall and its surrounding Liberty Square plaza encompasses 60 acres and includes many ponds and garden spaces. The plaza also houses two of Taipei’s performance art buildings, the National Theater and the National Concert Hall.

My favorite place to visit while in Taiwan is an area called Beitou. Beitou is a mountainous district north of Taipei City and is most known for its hot springs and its magnificent public library. The mineral waters from the many natural geothermal vents in Beitou are famous for their healing and therapeutic properties. An entire industry of hot springs bathhouses and hotels have sprung up in Beitou offering aroma therapy, massages, and hydrotherapy. There are a lot of places where tourists can soak their feet in the hot springs stream. Be sure to visit the Hot Springs Museum. When it was built in 1913, it was the largest public bathhouse in Asia at that time. Today, the museum offers a glimpse at its bathhouse facilities and Beitou’s history.

Next, visit the Beitou public library. Its wooden structure that fits seamlessly into its Beitou Park setting. Through use of eco-friendly features and design, the library is Taiwan’s first “green” building. The library opened in 2006 and was built to reduce the usage of water and electricity. To do this, architects used large windows to allowing in natural light and a solar panel roof to provide the electricity needed for operation. Also, the library collects rain water to be stored and used to flush its toilets.

HIGHLY RECOMMENDED  How to Become a scientist with Much Stress

Our final stopping point is Tamsui. Tamsui is located on the western tip of Taipei and our favorite place was the Fisherman’s Wharf. We learned that not only do the restaurants that dot the Fisherman’s Wharf boardwalk provide the freshest seafood available, it also provides breathtaking sunset views. Fisherman’s Wharf still functions as a harbor for local fishermen and they proudly provide harbor for 150 vessels! Our favorite walk is across the “Lover’s Bridge” pedestrian bridge, named as such because it opened on Valentine’s Day 2003.

Its architecture resembles a sailing ship’s masts. It was about a 3-minute walk across the bridge, which at sunset is magnificent. Lover’s Bridge is also a great place to catch the yearly fireworks show and concert that the city hosts each year to celebrate Chinese Valentine’s Day (which occurs in August and not February 14th). Another way to experience Tamsui is to take a ferry from the Tamsui Ferry Pier and disembark at the Fisherman’s Wharf. The ferry is a cheap way to see terrific views of the Tamsui waterfront. A one-way fare costs only $2 USD and takes only about 15 minutes.

Though our Taiwan vacation seems to have been over in the blink of an eye, it was amazing! While there is so much more to see, we feel we made the most of our travels in Taipei. I hope that your trip proves to be just as educational and encompassing as ours.

We are dedicated to BIG TIPS to help you get things done more efficiently. You will master how to do everything in a bigger way and live smarter. Topics include Home, Health, Lifestyle, Travel, Technology, Entertainment, Business and Video.

Our eBook series will be a collection of Tips and Tricks from our website. If you are an Amazon KU (Kindle Unlimited) subscriber or Prime member, you are eligible to enjoy our eBook for free.

TOP 10 JOBS THAT PAY YOU TO TRAVEL